As a match angler, fishing rivers is something of a love hate relationship! Some days you will turn up and draw the ideal peg with perfect conditions and there is no place you would rather be. Add a few foot of extra water overnight, tea coloured water (we’re talking proper northern tea too – none of that milky southern stuff!) and half a forest drifting through your swim, you can be left questioning why you even bothered getting out of bed.

Well it was the latter that we were faced with when we went out to shoot this feature, levels had shot up overnight and we were close to calling the whole thing off it was that bad! In a match situation though you have to fish the conditions you are faced with so that is exactly what we did.

Fishing peg 145 on my local River Tee’s at Yarm, with the river looking more like something from Willy Wonkers factory I opted to fish the feeder on a pole. This isn’t a method I fish that regularly but when faced with conditions like this it can be a real get out of jail card.

The first question people tend to ask when they see me fishing this way, is why? To most it seems so much easier to just flick a feeder out and wait for the tip to start dancing.  The benefits of fishing it on the pole are firstly it is a whole lot more accurate, you can be lowering it onto a dinner plate, which when casting with the feeder swinging back towards you in deep water is nigh on impossible. Also in conditions like we have today, we have all sorts of leaves and rubbish being washed down which will always want to stick to your line. By fishing the pole you have a lot less line in the water meaning a lot less rubbish catching on your line.

The setup itself isn’t too dissimilar to what I would be using when fishing rod and line, my feeder is running on the 6lb Optimum mainline on a quick change bead and stopped between two float stops around 8 inches apart. This sits above a twizzled loop around two inches in length down to a Cralusso quick change swivel to attach my hook length. I opted for 0.12mm MAP Power Optex to the ever-faithful Kamasan B560 in a 16, but this can obviously be changed to suit the situation on the day. 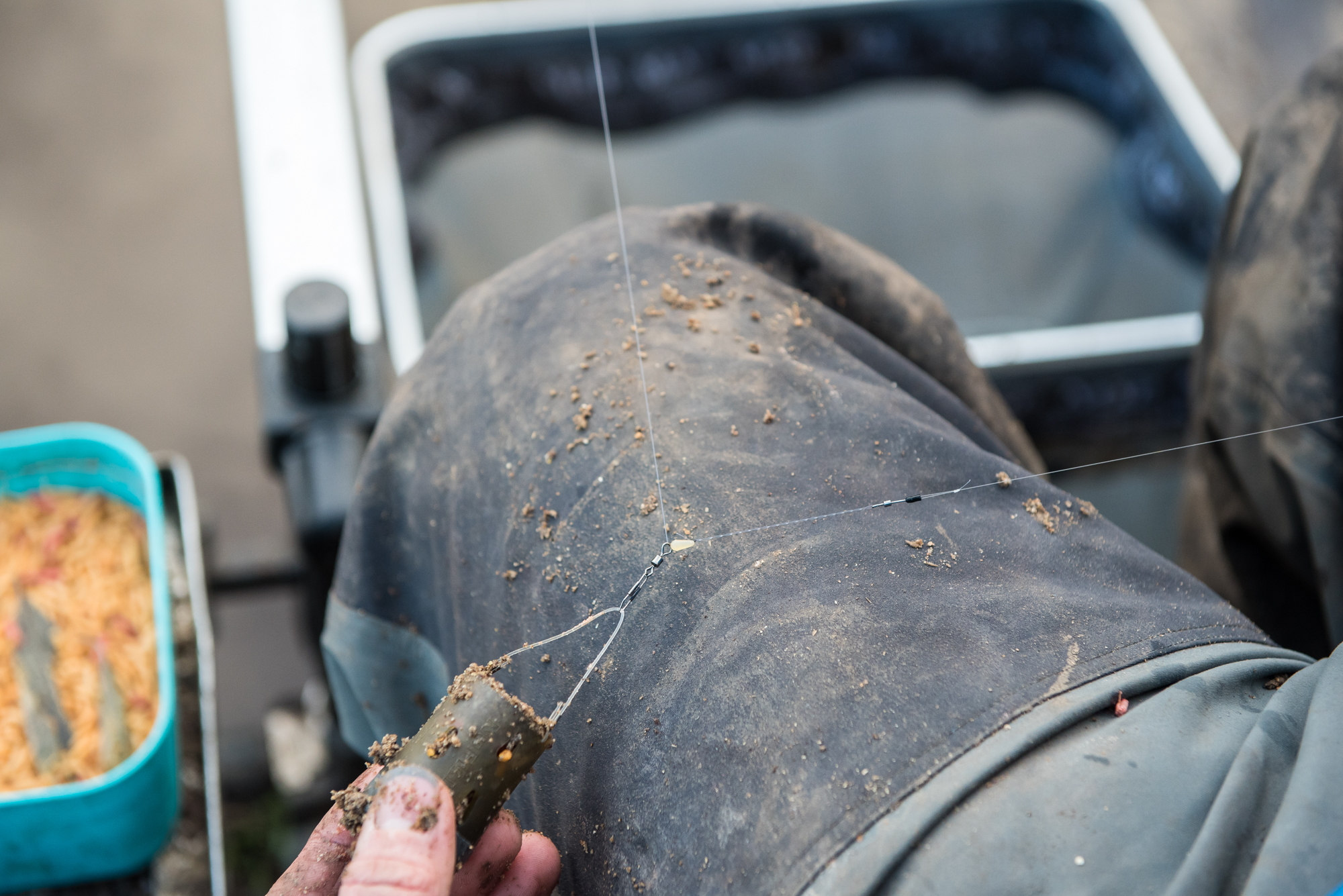 I tend to opt for quite a heavy feeder in this situation, as you are lowering it in, disturbance isn’t an issue and the way I’m setting up I want tension running through the whole rig. By setting my pole on a bump bar, your setup can become like a spring loaded trap. With the feeder firmly on the deck and a tight line running up to your pole, you can see that there is enough tension that a foot or so of my elastic (MAP Yellow Twin Core) is pulled out, so the second anything picks up the bait it feels the tension and pretty much hooks itself. It can be a bit of messing around to make sure everything is set up correctly but when it is the bites can be savage, even from small fish.

You will notice I haven’t mentioned floats, for a very good reason… I don’t use one! Or at least not a full one.

I will fish with either no float whatsoever when targeting bigger fish, the bites are that brutal that you are just waiting for the elastic to be pulled out. Today though we had to be a little bit more sensitive so I opted to use just a bristle out of the pole. Nothing fancy, I just bastardised an old float, which was in the bottom of my box, and it gives you a nice visual indication when fishing for smaller fish. Just connect it top and bottom with a couple of bits of silicone and you want it set just above the surface of the water. If you set it too low in swirling conditions like today you will be forever striking at false bites.

This is my go-to river mix, the crumb, Gros and Noire give it an awesome smell and feed content and the Black River for the binding. You do have to be careful not to overdo that one though as you can make it too sticky and end up having bait in the feeder. With these quantities it ends up perfect every time and with everything being in pint or half measurements it’s easy to remember and repeat on the bank. 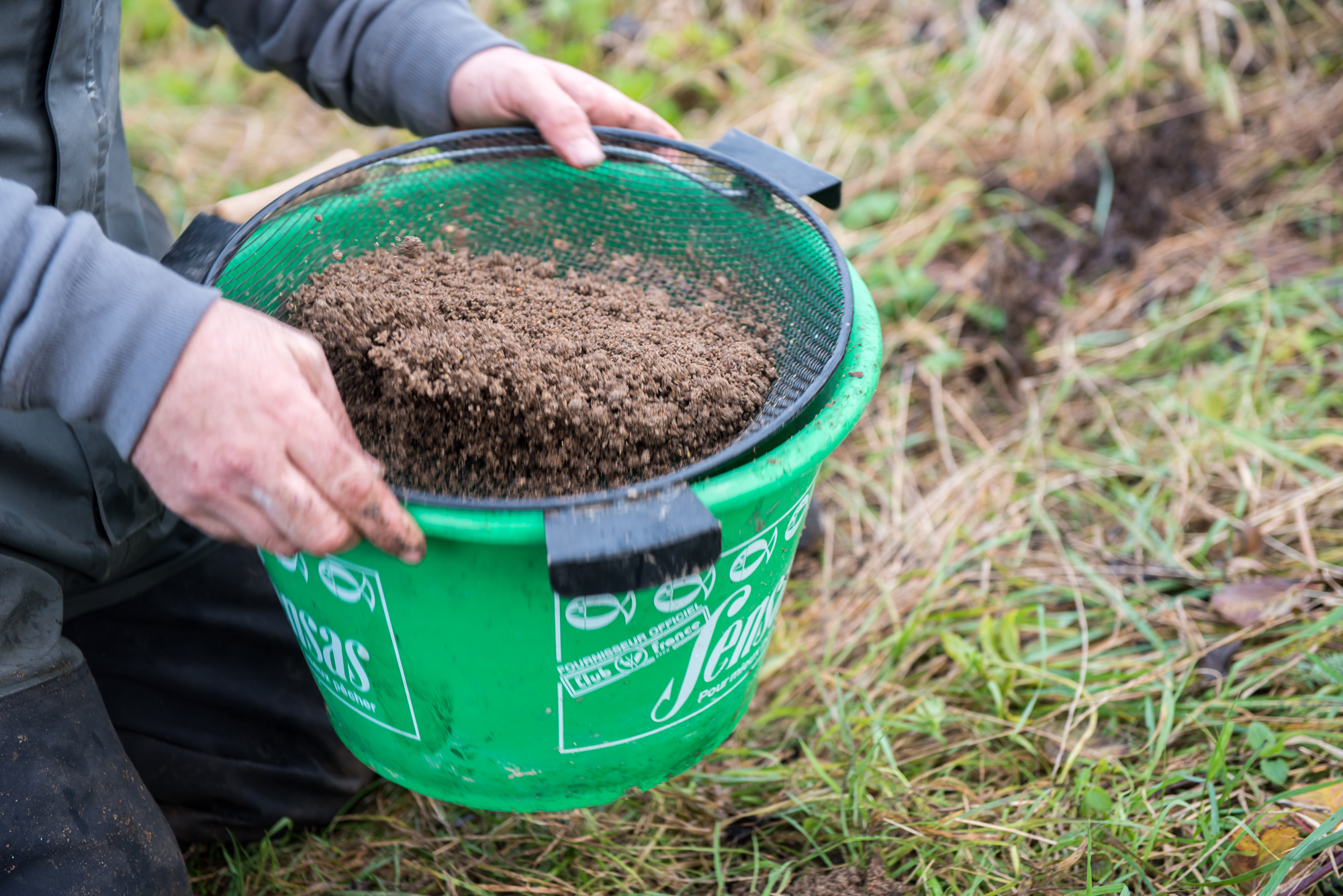 Alongside that mix I will always bring a selection of live baits, maggots, worms, casters and pinkies. I will start by feeding a bit of everything in the feeder and trying a variety of hookbaits, once I have some sort of idea what they want to be eating then I will tailor my feeding to this. In my mind this is a lot safer way of doing it rather than piling in a load of maggots only to find that they want to be eating worms on the day.

With regard to hookbaits it will normally be maggots or worms, worms often outscoring in conditions like this due to the added scent. Don’t be afraid of mixing it up a bit though! A worm section tipped with a pinkie for example will be giving off loads of scent whilst the added fleck of colour can really help to draw the fish to your hookbait.

For the feature we were lucky enough to have a nice slack to fish to being on the inside of a big bend, as hard as we try, you can’t always draw nice pegs like this so you just want to be fishing on the crease or just out of the flow, I ended up at 13m today but don’t worry if you have to come closer. Just adapt it to the peg you find yourself in. Also you want to be looking for the flattest bottom possible so again spend a bit of time working your swim out before hand.

Onto the actual fishing itself! The first job is getting the feeder out and I have settled on one of two methods depending on the elastic I’m using. If I’m using a heavier MAP Black Twin Core, then I will hook the line round the puller kit – exactly the same as using a cable tie really. It’s just a case twisting your pole and dropping your rig nice and accurately.

The second way, which I used today due to the lighter elastic, is a little bit harder to master, and explain for that matter!

Whilst holding onto the feeder you want to ship as much pole out as you can tensioning it against the elastic, then in one movement release the feeder and it will shoot out into the river whilst you lift the pole and ship out any extra if needed. Then it’s a case of dropping it onto the spot and lowering it down. Now it’s only something that you can teach yourself through practice but once you master it, it is a lot quicker way of getting your feeder out… Plus anyone watching from the swim next door will be well impressed!

I will always look to start my swim off by just using the feeder and recasting every few minutes, which is exactly what I did today, for the first hour I had absolutely nothing… No indications and with a rather cold and bored cameraman looking over my shoulder the pressure was on.

To this point I had been fishing with maggots on the hook so decided to swap over to a worm section and this brought an almost instant response but unfortunately the fish was only on for a couple of seconds before unhooking himself!

I took this as a sign to add a bit more chopped worm to the feeder and a fresh bit of worm to the hook (even topped with a pinkie for good measure) this change seemed to work and a decent roach was soon making it’s way to the net. Shortly followed by another and then a dace joined the party.

Although far from solid the change of bait had really switched the swim from being seemingly barren to a steady run of bites.  It did begin to tail off though and the bites did dry up in the end, I even risked balling in four balls, it was always a bit ‘shit or bust’ and it wasn’t to be that day.

But it proved exactly what this method is all about, fishing in conditions most people wouldn’t even set up in, by using the correct methods you can always sneak the odd bite out. Even though I didn’t exactly have a net full at the end of the day, I’d enjoyed myself and caught a few fish, in match conditions making the most of what you are faced with is what it’s all about. 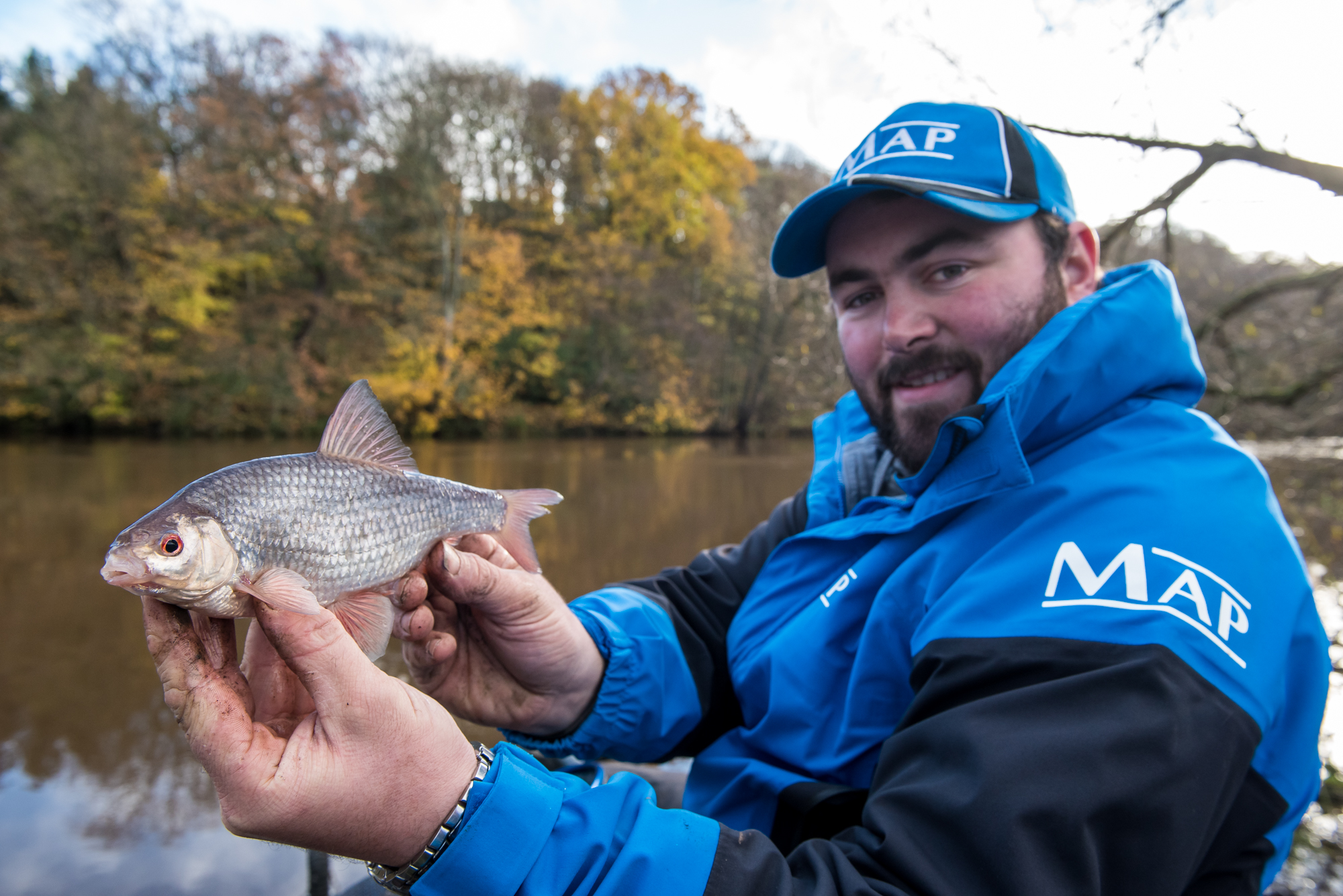 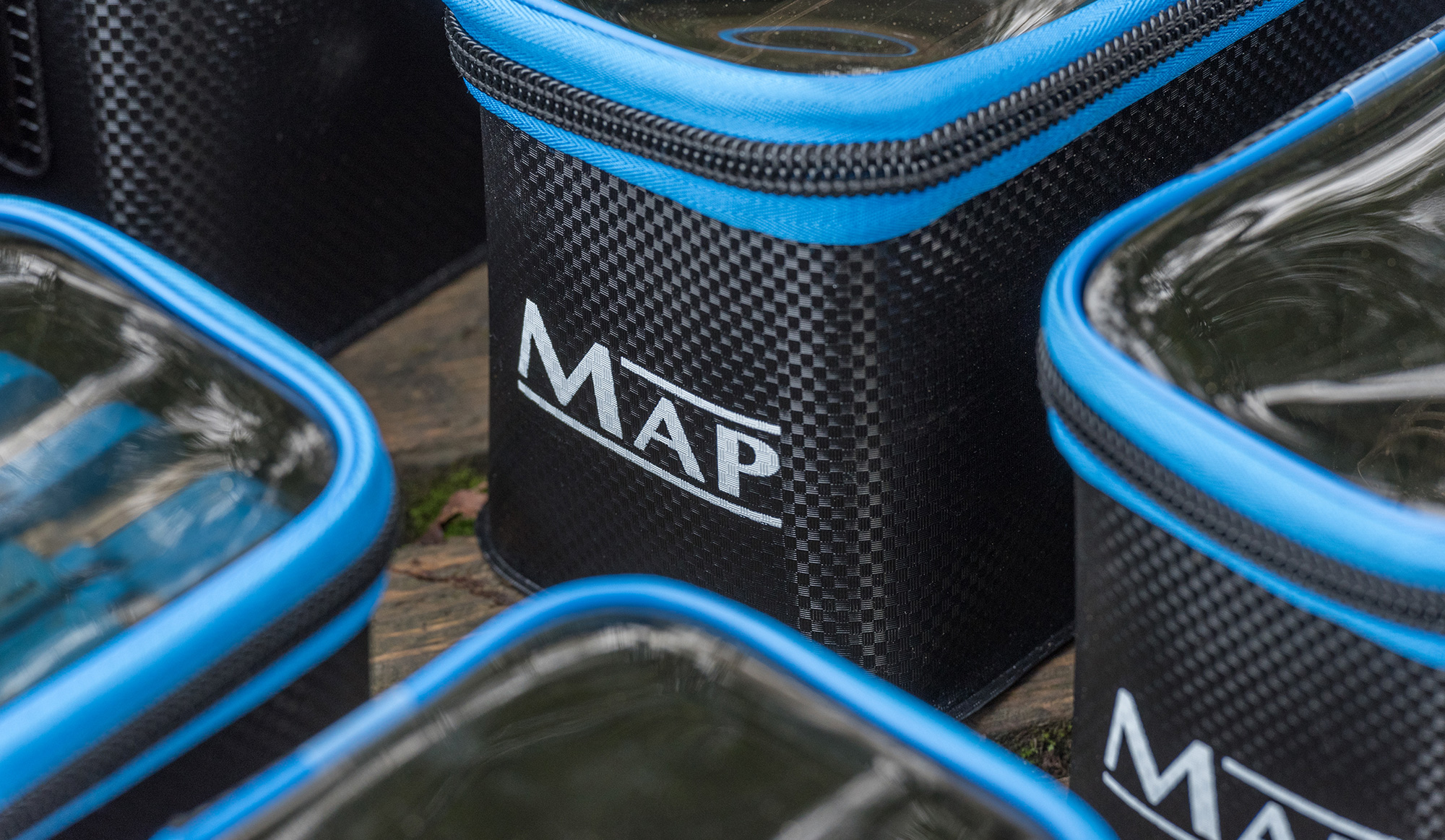 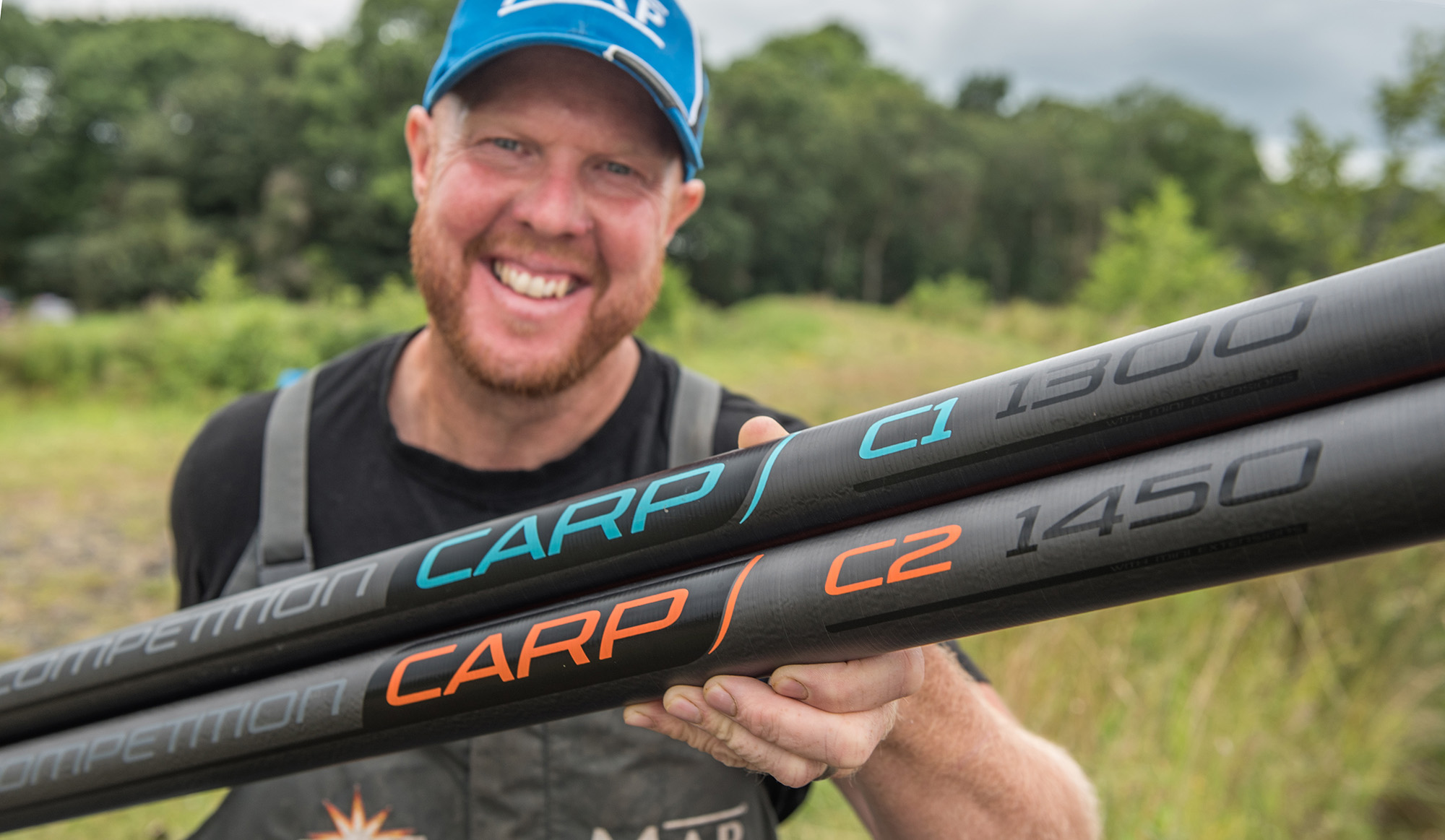